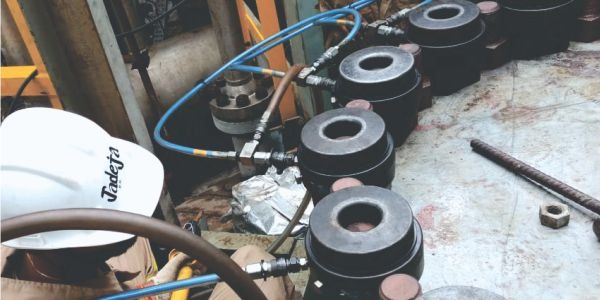 What are Bolt Tensioning Tools and How Do they Function?

Hydraulic bolt tensioning tools tighten large diameter bolts quickly and easily to high and accurate pre-loads.  Unlike conventional methods, it does not use torque. The forceful turning of the nut or bolt, like impact wrenches, flogging spanners or hydraulic torque wrenches is not required.  All of these methods have one common enemy, FRICTION.  Overcoming thread friction and friction between the nut and the washer uses up over 80% to 90% of the torque energy applied to the nut or bolt, leaving around 10% to 20% of the energy to produce useful tension or elongation in the shank of the bolt.  Variations in this friction loss, from bolt to bolt causes nonuniform tension in bolts that have been tightened to the same torque or impact wrench setting. 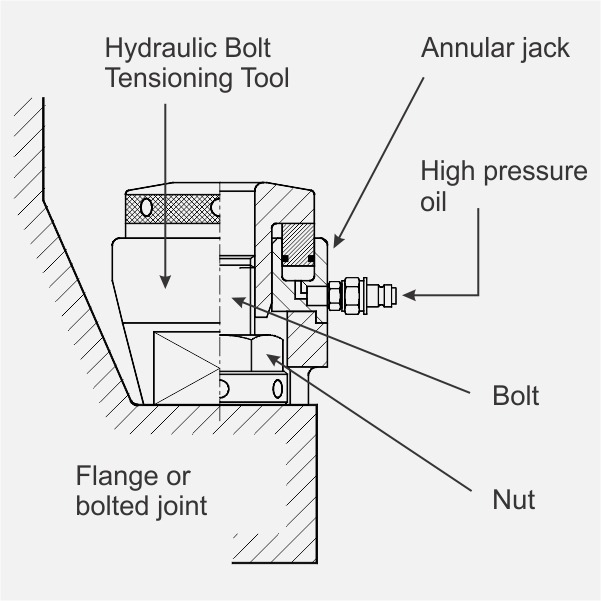 A hydraulic bolt tensioner is an annular jack that fits over the bolt and nut to be tightened.  The jack pushes against the bolted joint and pulls on the end of the bolt, which needs to be at least one diameter longer to accommodate the bolt tensioning tool.  Because the force produced, by the jack, is applied directly to the end of the bolt, a tension equal to the load generated by the jack is developed in the shank of the bolt.  With the jack applying the tension, it is possible to turn the nut with zero torque until it is tight.  The load applied by the jack is then relaxed and a high percentage, depending on the length of the bolt and its diameter, is retained in the shank of the bolt.

Components of a Bolt Tensioning Tool

The diagrams below show the component parts of a typical bolt tensioning tool and the order in which they are assembled together onto the bolt and nut to be tightened.  The last diagram shows the tool fully assembled.

Care should be taken to ensure that there is a minimum of one bolt dia length of thread above the nut for the engagement of puller.

Flexible hoses with self-sealing quick connect couplings are used to gang the bolt tensioning tools together to form a hydraulic ring main.  The ring main and tensioning tools are pressurized using an air-driven, electric driven or hand pump.

The off the shelf tensioners available are to suit the standard flanges like ANSI, API, etc. Also, it is available in sets so that the same load cells can be used with a change of puller and socket for the nearby sized bolts.

Bolt tensioners are normally available with max. working pressure of 1500 bar and will provide sufficient load to seal a standard flange with spiral wound gasket or RTJ gaskets.

The load calculation of the tensioners is quite straightforward:

L = P x A where L is the load required on the bolt, P is the pump pressure and A is the hydraulic pressure area of the tool.

Design of a Bolt Tensioner

In some cases, special tensioning tools are designed to cater to non-standard flanges; these tensioners have reduced dia to fit into restricted spaces or working at a higher pressure to provide more load.

Bolt tensioners are also designed with puller threads integral with the load cell to reduce the overall dia of the tensioners to provide the same or more load where radial space is limited. This has the disadvantage that these tensioners can only be used for that particular bolt dia and thread pitch.

In the infrastructure and wind industry, we see a higher requirement of bolt loads and special multistage tensioners are available for these bolts. However, these tensioners are taller although small in dia and the bolt protrusion above the nut has to be controlled.

Bolt tensioning tools can be ganged together to enable multiple bolts to be tightened simultaneously, to the same high and accurate pre-load.  This is particularly useful when compressing gaskets in pipeline or pressure vessel flanged connections.  The high load developed by the multiple bolts tensioning tools is evenly distributed around the joint causing the gasket to flow into the surface irregularities of the flange giving a much better seal.

For subsea tensioning normally all the bolts are tensioned together (100% tensioning).  Since space is not there to fit tensioners on all bolts from one side tensioners are deployed on both sides of the flanges on alternate bolts. This eliminated the need for multiple passages to achieve the target bolt load.

In the industry, 50% tensioning (every alternate bolt) or 25% (one-fourth of total no of bolts) are also common. The bolt tensioners are provided with spring return for the piston (to speed up the operation, especially for bigger bolts sizes) and positive load stop. The positive stop helps the operators from making mistakes over pressurising and the piston coming out of the cylinder causing damages.

While tensioning, the load applied is not the load that will reside in the bolts (the residual load) after removal of the tensioning tools.

Load loss is caused due to the bolt thread deflections, nut embedment into the flange, etc. and a Load Transfer factor is used to compensate for this. We use a formula to calculate the load transfer factor to find out the bolt load to be applied on the bolt based on the grip length of the joint and the residual load required on the bolt.

It is not advised to tension short bolts as the load loss will be very high and the tensioner will have to be oversized to generate these loads.